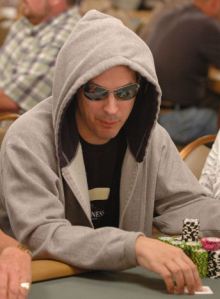 Today I’m going to give you an explicit technique to improve your rationality. But first, a short digression: Have you ever seen poker players on TV talk to themselves? It’s an interesting phenomenon and there’s a few different motivations behind it. Players like Phil Hellmuth and Mike Matusow might be doing it to avoid tilting when they get unlucky. But I’m more interested in another form of self-talk where players tell themselves out loud how likely they are to win hands. It’s something I’ve seen players like Phil Laak do a lot.

For instance, when Laak gets his money in behind, instead of moaning about his bad luck, he often says things like, “Wow. This is what 5% feels like” — pointing out that he still has a 5% chance to win the hand. Why would he do this? Is he trying to stay positive and upbeat in the face of long odds? Maybe. But I have another theory. Whether he knows it or not, Phil Laak is actually calibrating. As the cards are dealt, he keeps updating the verbal commentary to reinforce in his mind what different probabilities “feel” like. By the river, he might be saying things like, “This is what 2% feels like”. He’s calibrating his mind to instinctively know what it’s like to be a 50:1 shot.

This may sound ridiculous to you… especially if you’re already good with math. You might be saying, “I already know that if I’m 5% to win, I will win 1 in 20 times. What’s the big deal?” The big deal is that, by default, nearly all the modules of your mind either can’t handle probabilities or skews them in self-serving ways. Even if your deliberative mind knows the math, unless you’ve explicitly done calibration exercises where you’ve got something on the line, the rest of your mind will consistently overestimate how often high probability events will occur (such as 80% probabilities) and consistently underestimate the likelihood that lower probability events will occur.

If you haven’t played poker before, you may hear that some good outcome for you is 91% likely to happen and think, “That sounds fantastic!”. Since your mind want to believe it, it may even trick you into feeling like it’s almost a sure thing. But if you play poker, you’ll know that 91% is like trying to have your hand hold against a gut-shot with one card to come. You’ll know what that feels like. So you’ll know that 91% is far less automatic than it intuitively feels.

I highly recommend that as part of your rationality training, you calibrate like this while playing poker. When you get all in, immediately calculate your chances of winning the hand. Then say to yourself, “This is what XX% feels like.”

Over time, you’ll begin to intuitively sense probabilities instead of just hear a number and think you know what it means. This has ramifications for wider life rationality too. As with all biases, being mis-calibrated costs you utility. The more mis-calibrated you are, the more subject you are to the loss of time, money, and well-being. You’ll be more likely to be loss averse, risk averse, vulnerable to zero-risk bias, dutch-booking, circular preferences, or even neglect probability entirely when making decisions under uncertainty. If you’re mis-calibrated, the world will take advantage of you at every turn.  Remember: just like the poker economy, our real economy and even society at large is designed with your mis-calibration in mind. It will supply as much exploitation as your poor thinking will support. So calibration is a big deal. Make sure you’re well-calibrated to avoid this constant loss of utility!